As soon as it was confirmed that extra-classes,which were scheduled from 1st Nov. to 9th nov. for std 9&10 , two kind of expressions covered the studens face. First showing the raised curve of smile ,which belonged to the students who were very happy with this announcement and 2nd showing the deep sorrow resembling their dissatisfaction belonged to other group of students. I don’t know which category i belong to. Probably my face depicted another expression-the mixed one. I was like ‘now what the hell i shall do in these 10 extra days !’ This was the notion of my half brain. The other half was happy to get a few extra days to make sure i win the challenge given by dad. And i think you all are smart enough to guess what it was,nothing else than learn cooking. 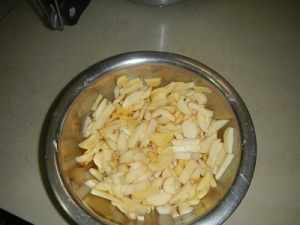 This tolerably good cutting was done by me !

From years cooking had been one of the activity that i was unwilling to learn. Well,that was all because of my preoccupied understandings about it. I considered it one of the most boring work of world and learning that skill , WASTE of time ! How irrational feeling that was,now I have began to understand when i started learning the particular activity,only to win the challenge ! Initial days were not so gud. Every hour with a strange expression on my face ,i used to say,’mumma how u spend hours in this weired place.’ but now ,slowly and slowly i am understanding (trying ,not understood till now) that this work is also not less intresting than watching a movie or so. Ok, finally when i have stated that i didn’t like this work,then i must state my reason of abhorrence too. I strongly believe that household works especially cooking are the primary reason why there are less gals in toppers list of any exams. They become busy in these extra stuffs and are unable to provide sufficient time to their intrests and study. So i had a simple funda – “na sikhungi , na karungi”. So till some day ago, i didn’t knew even the C of cooking ! But this challenge, it provoked my thoughts and finally i decided to learn this work,called cooking.

And today ,it was the one of the most amazing day of this journey. Today for the first time,i cooked. What did i cook ? I’ll not reveal but certainly i cooked something for whole family. And it was really funny to see ‘OMG, is it u” sort of expression on everyone’s face.

When did I write last?